The Apollo is a very large butterfly that is a typical mountain species. They are known for their bright, neat appearance with two pairs of white wings and a white hairy body. This species is particularly interesting to the entomologists and butterfly lovers due to the variety of subspecies. The Apollo butterflies are found around the world in at least 23 different subspecies. The larvae are velvety blue-black having small orange spots all over. 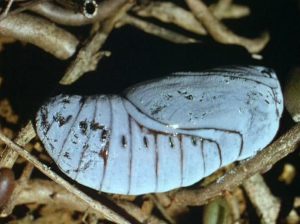 When the caterpillars are fully grown, they pupate on the ground weaving a loose cocoon around themselves, inside which they metamorphose to emerge as adult butterflies after metamorphosis. The pupa is white with fine, black venation-like patterns.

Sexual Dimorphism: The females are larger than the males.

Color and Appearance: When the wings are open, large black spots on the forewings and red eye-spots on the hind wings upon a pure white to cream background can be seen. When the wings are closed, the ventral side of the wings display similar patterns but are relatively fader than the dorsal side. However, appearance might largely vary between individuals, depending upon subspecies. The red patches often keep fading with time, in the intense sunlight. Hence, the eye-spots in the older individuals begin to appear orange. The sides of the wings are somewhat translucent. 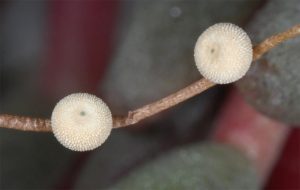 Eggs are laid individually and are shiny or pearl white in color with a texture resembling the tip of young corn.