The Brimstone Butterfly is a species of common medium-sized butterflies that are widely distributed throughout the tropical regions of the world in six different subspecies. The cream and flavescent Brimstone Butterfly might be one of the representative species of the entire butterfly family since the very name ‘butterfly’ was probably derived from the ‘butter-colored flies’ that showed up with the advent of spring. Through their acts of mimicry and camouflage, they are known to be the ‘master of disguise’.

As the caterpillars hatch out of the eggs, they crawl up to the top part of the leaves to consume them. They are diurnal, only resting and foraging during the daytime. The larvae at the first stage are about 1.7 mm in length and gradually attain a final size of about 34.9 mm when fully developed. They are green in color having tiny white hairs and dark marks throughout the body. The color pattern at this stage is so intricate that it is difficult for the predators to distinguish them.

The chrysalis is initially green in color, and is 22.2 to 23.8 mm in length, resembling a curled leaf as an adaptation technique to camouflage. Just before emergence as a butterfly, the wing areas of the male individuals turn yellow.

Color and Appearance: These butterflies have a very neat appearance, with the wings being almost entirely solid-colored. Both the sides of their wings look the same. The male and the female are sexually dimorphic, with the former being sulfur to cream yellow, while the latter, white with a very mild greenish tinge. Also, the iridescent dorsal wings of the males change color under ultraviolet light, while the females do not. Both the sexes have a tiny orange central blotch on each wing. This, actually, is an imitation of ‘fungal spots’ present in real leaves.

Females lay eggs on the underside of usually buckthorn leaves, their primary host plant. The eggs are spindle-shaped and are approximately 1.3 mm in length. However, the color of the eggs keep changing gradually, from greenish-white to dark yellow, and eventually, brown prior to hatching. 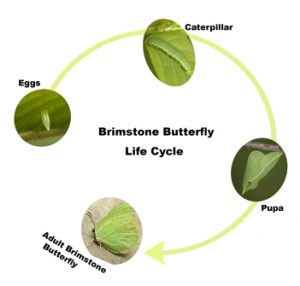