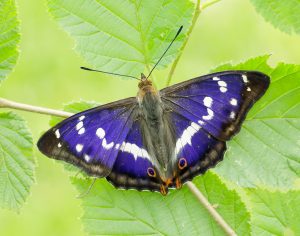 The Purple Emperor is a unique species of butterflies in the sense that their ‘majestic’ beauty (like their name) has hidden a bizarre behavior of theirs. The glossy blue butterflies are known to feed on rotting animal matters, and even urine and dung. They are a declining species, spread mostly in parts of England in five different subspecies. 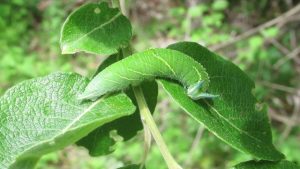 The larva is green in color, 30–35 mm by length and 12–15 mm by width. Soon after hatching out, the insect would eat its eggshell and would move further upward to the tip of its host plant to feast upon the leaves. They have two molts, with the first molt having two horn-like structures protruding out of their heads, and the second one being light brown and often feeding on flower buds. 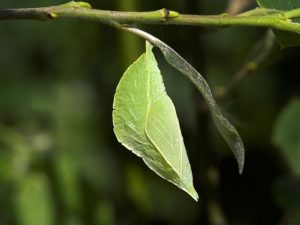 The chrysalis of this butterfly is exceptionally striking with probably even the most experienced eyes failing to differentiate between the pupa (hanging upside down) and the leaves of its host plant. The insect at this stage has different shades of green and is probably one of the best examples of mimicry (camouflage) with markings all over its body that looks like the network of veins in leaves.

Sexual Dimorphism: Unlike the relatively dull females, the males have a mild tinge or sheen of bright blue on the dorsal side of their wings. Also, the females are slightly larger than the males. 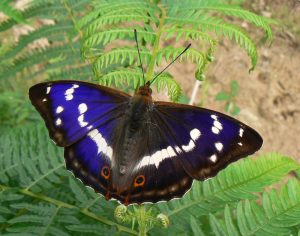 Color and Appearance: When the wings are open, the adult butterflies display a dark brown color at the base of the wings with characteristic white bands and spots. There is also a small orange ring seen on each of the hindwings. When the wings are closed, it is only the white random spots visible upon a black to a brown-black base. The ventral sides of the primary wings in both the sexes have an eyespot. Yellow to greenish in color and are laid one at a time.

These butterflies fly so high that butterfly collectors in England either had to attach nets on 14-15 feet poles, or else, use rotting animal carcasses as baits to lure the males down. 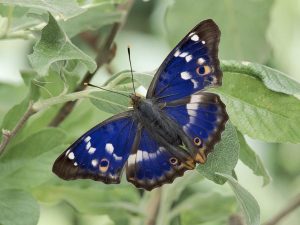 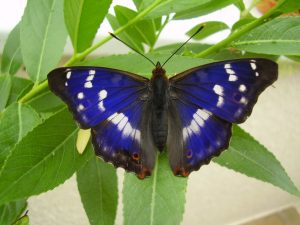