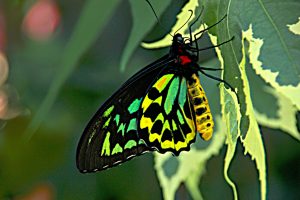 The Queen Alexandra’s Birdwing is the largest butterfly in the world and is known for their vibrant coloration. The species is relatively new and was discovered only in 1906 by English naturalist and bird collector Albert Stewart Meek, in forests of New Guinea. The males of these giant arthropods are much smaller in size than their female counterparts. The species has been declared as ‘EN’ (Endangered) by the IUCN 2.3 since they are decreasing in population due to deforestation and resultant habitat loss. 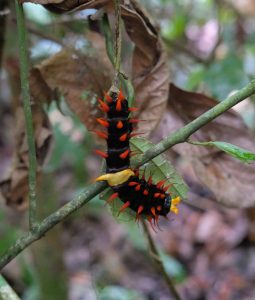 They have a black body with red tubercles all over, as well as a saddle or band of cream color at the center of their body. A newborn larva eats its own eggshell just as it comes out of its egg. Soon after, they begin feasting on the fresh foliage, as well as the flower petals, of their host plant. 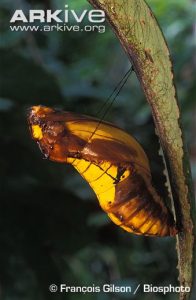 It takes around six weeks for the insect to reach the stage of the chrysalis. The cocoon has a golden yellow to tan coloration with distinct black marks on the body. This stage lasts for about a month or sometimes a little more.

Color and Appearance: When the wings are open, the female butterflies display a brown coloration with white marks patterned in a pair of rows of chevrons in their primary wings, while the hindwings are also brown, but having submarginal lines of centered triangles in dull white to yellow. The males show an iridescent blue-green hue in both the primary and secondary wings along with a black band at the center. When the wings are closed, both the sexes display a fainter version of the dorsal sides along with darker veins. 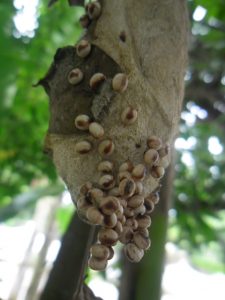 Large and light yellow with a flattened base 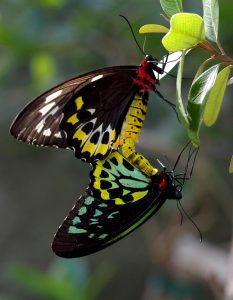