The Scarce Swallowtail is a species of very large distinctive butterflies found in four different subspecies. However, one of these (Iphiclides podalirius feisthamelii) is debatably considered as a separate species (Iphiclides feisthamelii).

The chrysalises are found in two colors, brown and green. This is for the purpose of camouflage – to hide themselves among the brown tree branches and green leaves. The summer pupae are always green, and the winter ones are brown that eventually enter the phase of hibernation before fluttering out as butterflies.

Color and Appearance: When the wings are open, the scarce swallowtails display several long and black tiger stripes in knife-like patterns on a creamy white base. The borders of the hind wings are lined with several inverted crescent moon-like blue markings including the long tail-like protrusion at the end of the two wings. There are also two orange-yellow spots almost in the middle of the secondary wings. When the wings are closed, they display an identical pattern scheme in both the male and the female.

Light greenish in color and are laid on host plant leaves 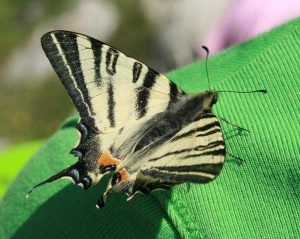