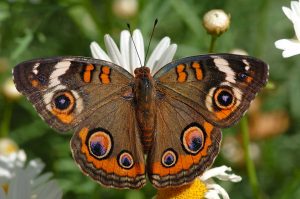 The Buckeye Butterfly is a species of true brushfoot butterflies that are found in large numbers in parts of the US and Mexico. They get their name for their bright and colorful eye-like markings on each of their wings. 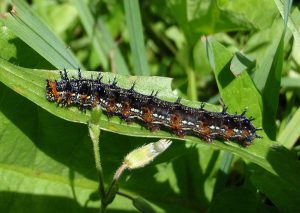 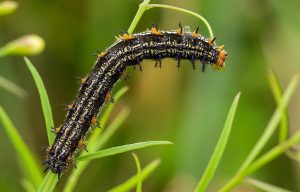 The larval stage of the buckeye lasts anything between two and four weeks. The caterpillar can attain a length of up to 1.5 inches. It has orange spots all over the body on a black base. They have spine-like structures protruding out of the body by their lengths. The spines appear blue towards the roots. The caterpillars are isolated creatures and do not indulge in group activities. 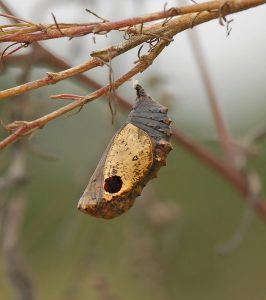 The chrysalis is dark brown, as if an adaptation to camouflage amidst the twigs, branches or dry leaves while hanging. There are also lighter brown patches and light dotted marks all over the body. This stage lasts for 1 to 2 weeks.

Color and Appearance: When the wings are open, the base coloration in all the four wings is brown. The primary wings display two cell bars in bright orange, as well as two eyespots, with the lower eyespot being the largest of all. The secondary wings also have two eyespots each, with the larger upper one having a crescent in magenta. When the wings are closed, the undersides of the hind wings display a brown to tan coloration around the summer months, which turns somewhat rose-red during the months of autumn. However, there are two bordered blue-to-black eye markings on the ventral side of the secondary wings of the males, which are not present in the females. 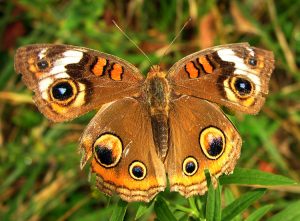 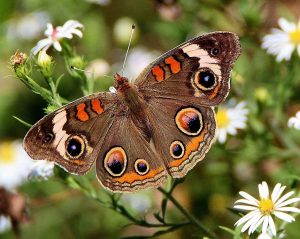 Flight pattern: Fast and periodic, around the low branches 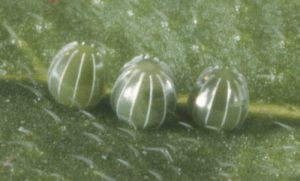 The tiny green and round eggs are laid singly on the tender leaf buds or the upper sides of leaves. 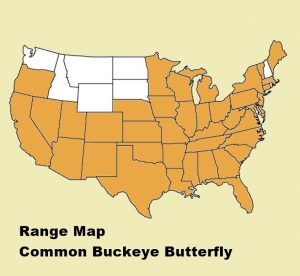 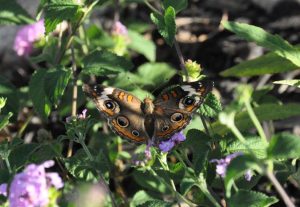 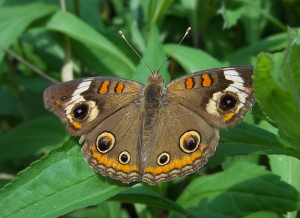