The Miami Blue is a metallic blue butterfly, which is the only subspecies of the Cyclargus thomasi and is found in the US. The population of these arthropods has gone endangered, threatened mainly because of critical factors like habitat loss, invasion by non-native flora, measures taken for mosquito control, vegetation management, and of course, the unethical collection of butterflies.

The larvae of these creatures are usually bright green with a black head. They have a slug-like shape with a reddish to a tan dorsal line running through the middle. There are also white lateral lines on both sides of the creature. 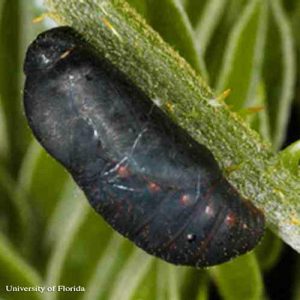 When the caterpillar assumes the form of the chrysalis, its body color changes to brown or black. It takes almost 30 days for the insect to metamorphose into an adult Miami Blue butterfly.

Sexual Dimorphism: In the males of the species, the top portion of the wings has a metallic blue shade, while in the females they are dark gray along with some blue tinge around the base.

Color and Appearance: These are very small size butterflies with both the male and the female having two pairs of wings that are of bright blue color on the dorsal side, and a gray shade at the ventral with four black basal spots. However, they are sexually dimorphic with the male Miami Blues’s hind wings having a narrow black border, while the female has a thick black border, along with and an orange eyespot (mimicry) close to the outer angle of the hind wings.  Both the sexes have a broad, white band on both the wings. The females would lay up to 300 eggs, one at a time on the host plant.