Queen butterflies are one of the most stunningly colored butterflies with a wide range of distribution. Due to their similar size and color, it can sometimes be difficult to tell them apart from their cousins the monarch (Danaus plexippus) and soldier (Danaus eresimus) butterflies. They also have similarity in color with the viceroy butterfly (Limenitis archippus).

The queen butterfly caterpillar has visual similarity with the monarch and the black swallowtail caterpillars. They are patterned with alternating white and yellow stripes on a black base. There are also three pairs of needle-shaped protrusions from the head, on the back, and the last segment. The larvae have a small head and a large, spine- or hairless, cylindrical-shaped body. The stage lasts for 2 to 3 weeks.

The chrysalis can be green, light to dark brown, or even dull white. It often displays ornamented golden spots. It is small, but thick and rounded, tapered toward the abdomen, with a golden-edged black band on top of a blue band. The pupa also resembles that of a monarch butterfly and may look like a pendant. It remains suspended by a long cremaster made of silk. The stage lasts for 5 to 15 days (except for overwintering pupae)

In an unfurled position, both the sexes display a chestnut brown base coloration with black borders. The primary wings have white spots scattered at the apex and patterned in two rows. Each of the secondary wings in the male has a brownish black scale patch (which the females lack), quite like the soldier butterfly; however, the former’s wing patch is more brown with less defined wing veins, compared to the soldier.

When folded, the ventral side of the forewings is almost the same as the dorsal side, while the hind wings display pronounced black veins. 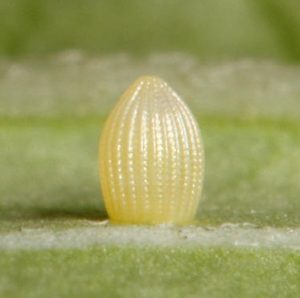 Yellow to creamy white in color with an ovate conical shape, broadly flattened towards the base and truncated slightly at the tip along with several longitudinal ribs and transverse cross-ridges. They are laid singly, and the stage lasts for 4 to 6 days.