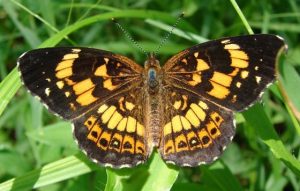 The Silvery Checkerspot is a species of average to small black-and-orange butterflies found in two different subspecies in parts of the United States and Canada. They belong to the Nymphalidae family, the members of which are known for their branched spines. 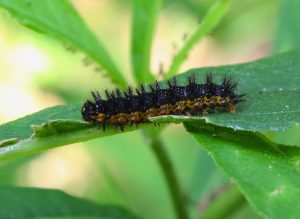 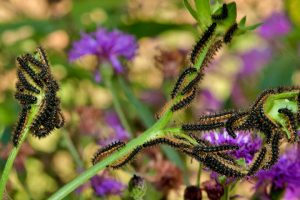 The caterpillars have dusted white spots all over the body on a black base. At times, a single or two yellowish-orange stripe/s are also present along the side of the body. 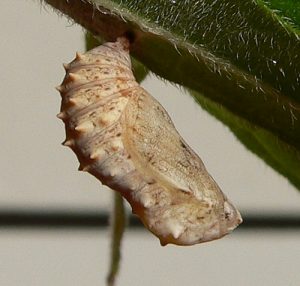 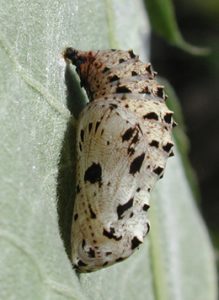 The chrysalis is typically white to cream, with yellowish or orange protrusions and some black markings, arranged in small rows.

Sexual Dimorphism: The wing coloration of the females is darker than the males. The median spots in the former are also paler. Finally, the only the males of the species have black antennal knobs.

Color and Appearance: When the forewings are open (dorsal view), they exhibit a faint yellowish orange color with unusual markings and borders in black, while, when they are closed (ventral view), a similar kind of design is displayed, somewhat like a relatively pale mirror-image of the other side. As for the hindwings, sets of sub-marginal spots are present on the dorsal side, each having dots, lines and narrow quadrilaterals, and the ventral side has a whitish base with orange and black crooked lines. The entire border on both the sides looks like a continuous stitch with a white string.

Flight pattern: Erratic; patterns change depending on the region

White to pale green eggs are laid in clusters of around 100 on the underside of the leaves of the host plant. 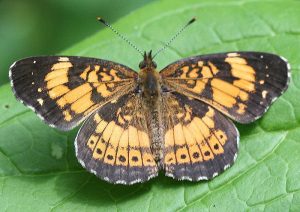