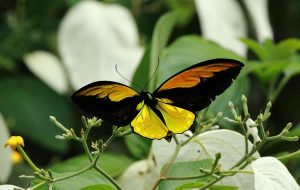 The Wallace’s Golden Birdwing, also known as the Wallace Butterfly, is a large, vibrantly-colored butterfly found in a very limited region in Indonesia in six local subspecies. The females belonging to this ‘birdwing’ butterfly group are conspicuously larger than the males. With its declining population, the insect has been grouped as ‘EN’ (Endangered) by the IUCN 2.3.

The appearance of the larva of this butterfly species has not been well documented; however, it is likely that the caterpillar is brown with a few rows of dark spines.

The pupa too has not been documented well, but it usually does on its host plant’s stem. It takes several weeks for the adult butterfly to emerge.

Color and Appearance: When the wings are open, the male butterflies display a black forewing with the leading edge being either red or orange and a longish, black odor-spot. The hindwings are red or orange with a few golden spots at the wing’s leading edge, with the entire edge being black along with several small golden and black spots at the outer edge. When the wings are closed, the forewings show a black coloration with some green spots, while the hindwings display a golden color with a chain of black spots by the outer edge and a network of black venation. The females’ base color of the dorsal side is dark brown with a few small white spots on the forewings, and large yellow marks on the hindwings. The ventral side is a fainter copy of the dorsal side. 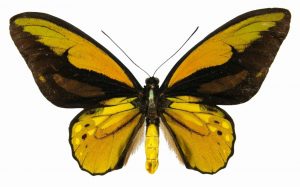 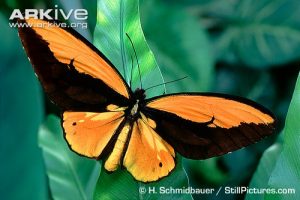 Mostly on the leaves of Pararistolochia species 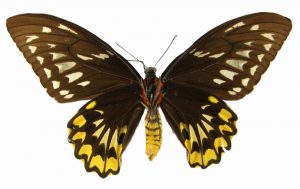 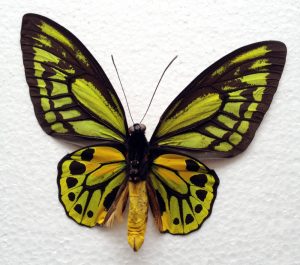