The Zebra Swallowtail is a species of brightly-colored butterflies that got their name from their zebra-like looks, with alternating patterns of black and white markings on their four wings. These arthropods are native to parts of the United States and Canada.

The caterpillars of this species are green or black with thick and light transverse stripes all over the body. The primary larval host plant is the pawpaw, and hence, they are mostly found in these trees. 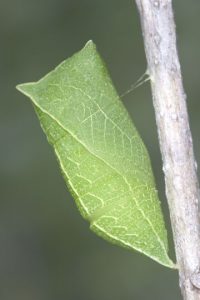 The chrysalis can be either brown or green with three small horn-like projections coming out from the head and thorax.

Sexual Dimorphism: Both the sexes of the species look alike.

Color and Appearance: The wings are somewhat triangular in shape with two sword-like protrusions at the end of the hind wings. When the wings are open, they show a white to greenish white base with random black stripes and bands running vertically. The hind wings consist of a pair of two blue spots in the corner of the inner margin, as well as one red spot close to the end of the abdomen. When the wings are closed, each of the ventral sides displays a thin red stripe that runs through the middle part of the hind wing.

The Zebra Swallowtails take two different forms – once during summer, when they look larger with broad black stripes on all the wings, and once during spring when they appear relatively smaller but much brighter and whiter.

Like most other species, the females lay their eggs underneath plant leaves. The eggs of these butterflies initially are dull green that turn brownish orange as they mature.