Comma butterflies are a beautiful member of the anglewing family. They have a wide range of distribution, inhabiting three continents. There was a significant fall in their population in the 20th century, but they made a comeback, becoming widespread in Southern Britain with a sill expanding habitat range. The larvae have a spiny body with a white mark along the back. There are white, black and orange patterns on the body. They actually resemble bird droppings, which often keeps predators away. During the final stage on the larvae, the white color disappears. The chrysalis hangs upside down from trees mimicking dead foliage. It is green and pinkish-brown with gold and silver spots.

When unfolded, the dorsal sides of the wings are a brownish-orange with black marks. In a folded position, their wings are brown and black, resembling the colors of a dead leaf. There is a white curve that looks like the punctuation comma, giving the butterfly its name.

During hibernation, their yellow-brown coloration keeps them hidden among dead leaves, working as an effective defense mechanism. 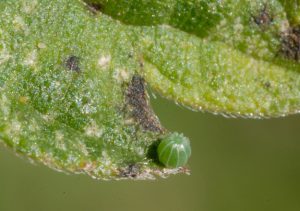 The eggs are laid individually on the host plants. They are green and spherical at first, eventually turning yellow and ultimately grey before hatching.