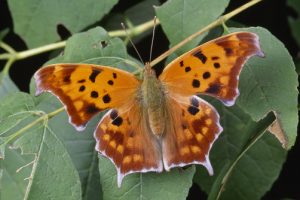 The question mark butterfly, a member of the anglewing butterfly family, is a stunning arthropod with an extensive range of distribution throughout most of eastern United States, Canada through to Mexico. Within this range, they are considered physically one of the largest butterflies. 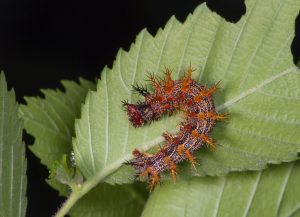 The caterpillars are 1.4 in (3.6 cm) in length with a reddish-brown head and short spines, each ending in a pair of opposite branching spines at the top. The body is black with yellowish or white lines which can sometimes obscure the black background. The spines themselves range from yellow to orange and black.

The chrysalis ranges in color from dark brown to tan. There are four spots, each silvery-white, arranged in two rows on the dorsal side of the thorax. At the bottom, there is a double row with reddish tips near the abdomen.

Sexual Dimorphism: Not present, as males and females are similar in appearance.

When unfurled, the borders of the wings are a powdery white. The forewing is orange in color with dark spots. The upper portion of the hind wings is black during the summer months and orange during winter.

In a folded position, the wings are the color of dry leaves with a small silver curve and dot, that gives the species its common name. 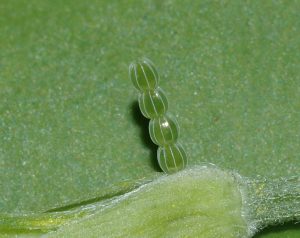 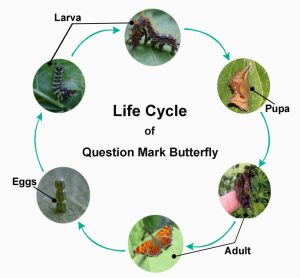