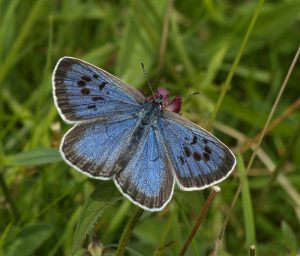 The Large Blue is a species of butterflies from the ‘blues’ family. Though it is not really a large butterfly in the true sense of the term (but rather medium, in general), they have actually been named so to differentiate them from the relatively smaller ‘Small Blue’ species that has an almost similar coloration pattern. The large blue has been declared to be ‘Near Threatened’ by the IUCN 2.3. 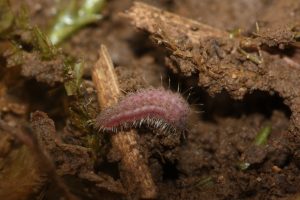 The larva emerges measuring only about 0.79 mm, and with a pale ochreous-yellow color tinged with greenish hues. On its upper side, there are longitudinal rows of serrated hairs that grow in pairs on each side of the caterpillar’s body segments and are curved backward.

The insect undergoes four instars before and spends up to 9 months before transforming into a pupa and feed on the leaves of its host. They exhibit a unique parasitic relationship with a red ant species, Myrmica sabuleti. The caterpillar hibernates in the winter in the hole of a particular species of red ant, Myrmica sabuleti, using a natural mimicry behavior. 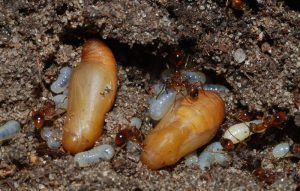 If the winter months coincide with this stage, they wait for the spring to come before emerging as a butterfly. The chrysalis is around 12.7 mm long. The creature has a faint apricot-yellow hue that gradually deepens to a dark amber shade, except over the wings.

Color and Appearance: When the wings are open, both the pairs of wings display a very bright blue with the forewings having several spots in dark gray to blue, and in shape resembling sesame seeds, while the outer end of the wings has gray borders. The hind wings, too, are thickly bordered with the same color as the other two. When the wings are closed, the striking absence of the cyan blue can easily be seen. Instead, they are mostly grayish beige. Also, both the wings display black spots of varied shapes bordered with bluish white. The females are somewhat lighter in coloration than the males. 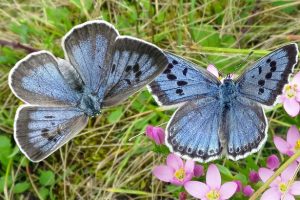 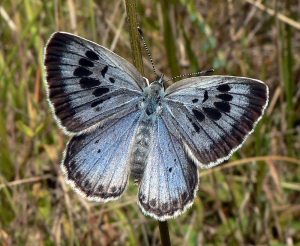 Flight pattern: Average and even 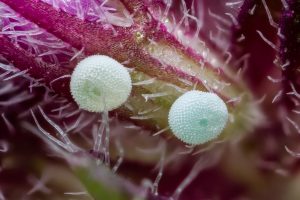 Very flat and semi-globular with a pale bluish white color, deposited on the thymus of a blooming bud 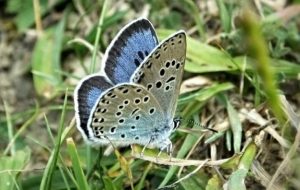 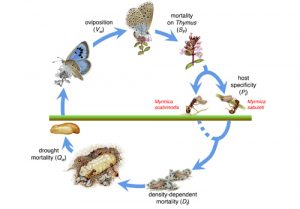 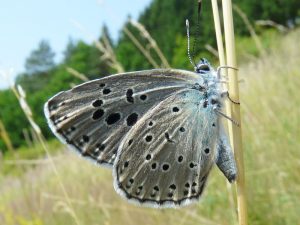