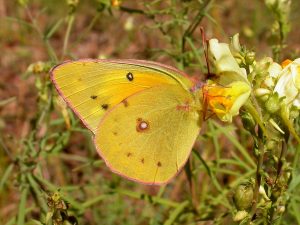 The Orange Sulphur Butterfly is a very common North American butterfly with a bright appearance and a relatively small size, found across the open lands. Their abundance, however, varies with season since they are mostly found between early spring and late fall. 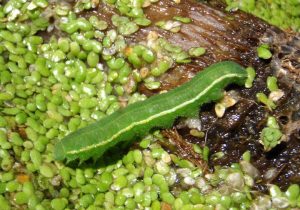 The larva feeds on the young leaves of their host plants during the night. It has a green body with a rugged or uneven surface and two straight yellow to bright white lines running from head to base at both the sides with fine clusters of dots running parallel in cyan and black. The caterpillars of the species are considered pests by the alfalfa growers because of their affinity towards these plants. 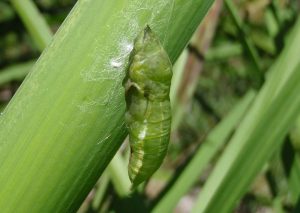 The orange sulphur chrysalis is light green in color (helping them camouflage in between dead leaves), and has a yellow lateral line with brown markings all over.

Color and Appearance: When the wings are open, they show a distinct bright yellow coloration with various amounts of scaling in light orange. Both the dorsal and the ventral wings have black borders at the margins. The color orange is evidently seen when they are in flight. When the wings are closed, the ventral side shows a yellowish-orange color along with an indistinct row of tiny black spots by the margins, as also, a double spot at the center of the wings. The males have a solid black border around the wings, while the females have yellow spots in its place. 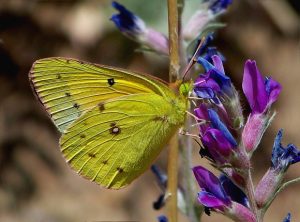 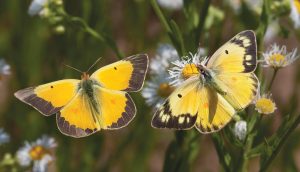 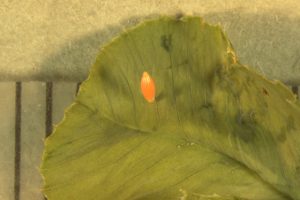 Laid singly, these are initially white, that turns red after a few days 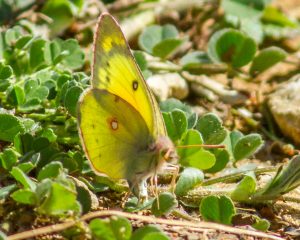 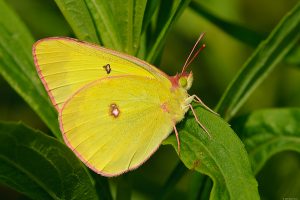 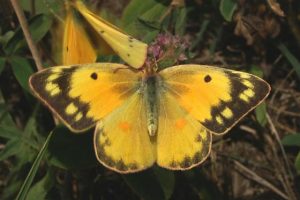