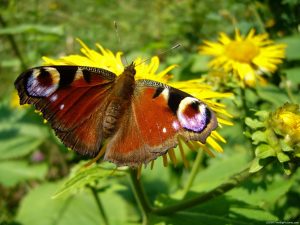 The Peacock Butterfly is a species of vibrantly colored butterflies found in two local subspecies, viz. Aglais io caucasica and Aglais io geisha across its range. These are one of the large butterfly species and can be seen best from around February when they come out of hibernation. They get their name from the bright, characteristic eyespots on the wings that often remind of peacock feathers.

The mature larva has a glossy black head and body with bristly spikes arranged in six rows with dots on each section; can measure up to 1.65 inches (42 mm). They eat voraciously, and hence, can grow fast. 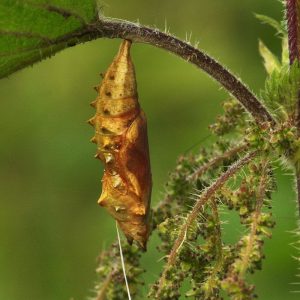 The chrysalis is pale green in color and has rugged angular depressions all over the body that help them look much like a leaf, and thus camouflage easily.

Sexual dimorphism: Females are marginally larger than males.
Color and Appearance: When the wings are open, the primary color of the wings is rust-red with a yellow, black, and blue eyespot at each wingtip, with the colors arranged in a circular manner, with one layer each of black, yellow and blue, finishing with a red blotch at the center. When sitting with their wings spread, these eyespots make them look like some larger animal’s head. The eyespots on the bottom wings are less vibrant than the ones on the upper wings. 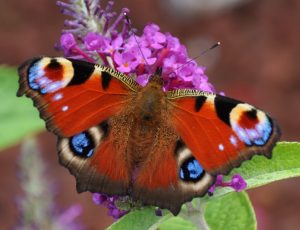 When the wings are closed, the color of the wings is black or dark brown on the underside, which makes them almost invisible if sitting among dead leaves.

Pale green to yellowish green in color with a round shape and rdges running down their surface; laid in batches of up to 400 at a time. 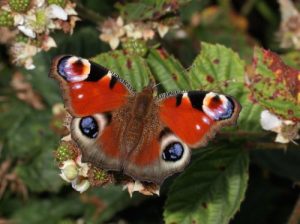 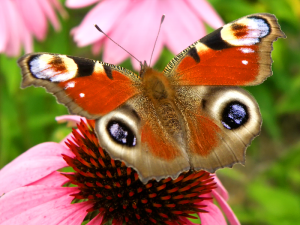