The White Peacock Butterfly is a species of mostly-white butterfly and is seen in parts of both the Americas. These tropical arthropods display a territorial behavior especially during the mating season, as the males get belligerently involved in protecting their host plant territories from other males and insects, where the females would lay their eggs. 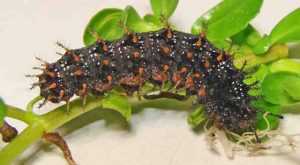 The mature larvae are black and spiny and have fine; white freckles all over the body. The spines are to discourage predators, while the spotted dark coloration is an adaptation technique for camouflage, as also to release toxic chemicals. The caterpillar can grow up to 4.2 cm in length, while the stage lasts for 2 to 4 weeks.

The chrysalis is pale green with small black dots all over. They take around 7 to 14 days to transform into a butterfly.

Color and Appearance: When the wings are open, the upper side shows a white base having light beige to brown marks with two rows of light crescents by the margins of the wings. The middle parts of the wings also have a faint cyan pigment. When the wings are closed, the underside shows a rather dull to grayish coloration with wavy orange patterns and two black spots close to the border of the hind wings. The forewings have one circular black spot each, while the two hind wings have two. During the dry months of winter, they look larger and paler; during the humid summer months, they appear smaller and more colorful. They are sexually dimorphic with females being bigger by size and are grayer on the underside. Mature adults lay eggs singly on the underside of the leaves of the host plants. The eggs are pale yellow and take 4 to 14 days to hatch.