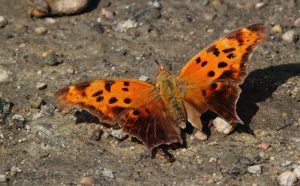 The Eastern Comma is a butterfly species found in that are known for their stunning adaptations of camouflaging in the barks and dry leaves of trees, as well as wing marks that resemble bird droppings. They are extensively spread throughout their range in the eastern part of North America. 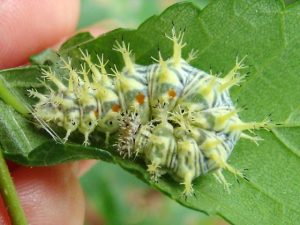 A matured larva is about 1.2 inches in length, with its head bearing small spine-like projections called ‘scoli’, with a pair of branching spines on the top. The colors might dramatically vary between individuals including hues like white, greenish-brown and black. The spines are also variable starting from all-black to white with black tips. 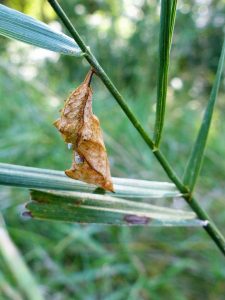 The color of the chrysalis is also variable. However, all morphs will have a common ventral gold or silver spots. During this stage, the pupa stays attached to a silk pad by the cremaster.

Color and Appearance: When the wings are open, the dorsal sides of the primary wings display a brownish-orange color at the base with dark spots all over. The secondary wings have two patterns, with the summer pattern being primarily black, and the winter pattern being orange decorated with black spots. Both the pairs have a dark border with pale spots. When the wings are closed, the ventral sides of the primary wings show one dark spot at the center of each, along with a brown base. The bottom parts of the secondary wings have a central silver to white comma (,)-like mark on each (from which they get their name). The projections of the hind wings are visible from both ends. 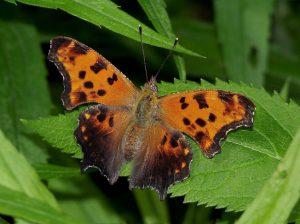 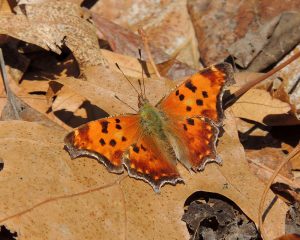 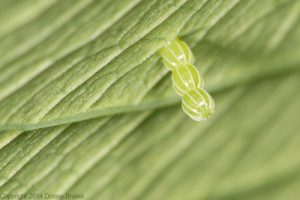 Eggs are green in color with the surface bearing a series of ridges arranged vertically. 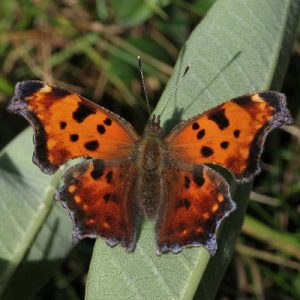 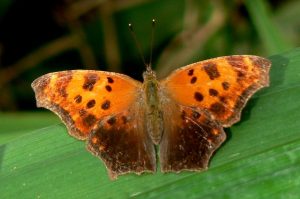